Achieving a black belt in martial arts is one of the highest honors that is bestowed upon dedicated martial artists. The use of colored belts came into practice around the 1880s when they were first employed by Jigoro Kano, the founder of Judo. He used them in Japan to denote ranks.

It takes an inordinate amount of perseverance, dedication, and time to earn these belts, especially the black one. It signifies the artists’ expertise, and the time required to acquire the belt depends on the type of martial arts. Let’s find out which martial arts black belt takes the longest to achieve and what factors affect this time period.

Although the average time to achieve a black belt is 10 years, there are a few factors that affect this time period. Read further:

Type of Martial Arts: Different martial arts have different time periods set to achieve the black belt. The time may range from 4 to 27 years depending on the martial arts.

Type of School and Methodology: The time period depends on the type of school you attend and the methods and structures the instructors follow there. The instructors decide if you are worthy of the belt based on your training and performance.

Which Martial Art’s Black Belt Takes the Longest to Achieve?

Here are the most common forms of martial arts and the years of training it takes to for a student to test for a black belt in them: 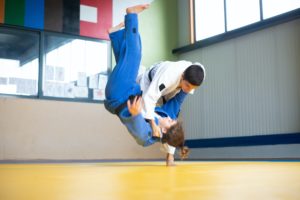 With consistent training and commitment to the art, most people are likely to gain a black belt within 3 to 6 years in Judo. You need to train for hours, multiple days a week to be eligible for the belt in this time period.

Judo has two different ranking systems, namely the kyū and dan grades. In the kyū ranking system, the artist has to achieve the 6 colors belts including white, orange, yellow, blue, green, and brown. Next is the dan system where the students are tested for the black belt. This system is divided into 10 grades and the first black belt is known as ‘shodan’. Next is Nidan, Sandan, Yondan, Godan, Rokudan, Shichidan, Hachidan, Kudan, and Jūdan, respectively.

Taekwondo is a Korean martial art that came into practice around the 1940s and 1950s. Similar to Judo, Taekwondo’s grade system for belts is known as dan. 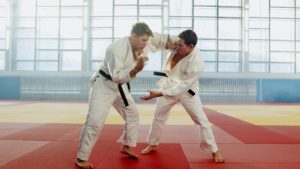 This is a senior ranking system and takes about 3-5 years. Nonetheless, you will have to pass the junior system known as geups, which consists of colored belts before that. Once you pass the geups, you will become eligible to test for the black belts.

The students are judged based on their practical execution and technique to earn their 1st degree of black belt. There are ten degrees of this belt and after you receive your first degree, you are considered a ‘senior student’ of the art. You should be at least 16 years old to take your first dan test. 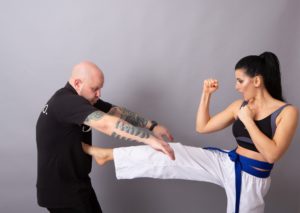 This Japanese martial art has 10 kyu levels for a student to pass before they attain the black belt.

It starts off with white, orange, red, yellow, green, purple, then three levels of brown (eighth to tenth) and finally a black belt. The black belt has 10 dan levels starting from shodan.

The black belt awardee works to gain an even deeper understanding of the physical and mental teachings of karate. Apart from the techniques, your commitment towards the art and consistency in the classes are also important to earn a black belt in karate. This can help you achieve the belt in about 5 years.

Also known as Brazilian Jiu-Jitsu (BJJ). It is a self-defense martial art founded in 1920. Out of all the martial arts, BJJ black belt takes the longest to achieve, i.e., 10 years. 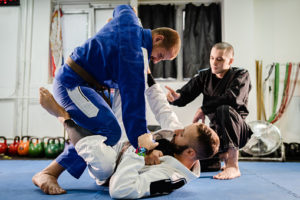 The regular years of training help you attain this prestigious belt that symbolizes your expertise in the art. Even promotion to the blue belt in the BJJ takes 2 to 5 years, a time that is almost equal to attaining a black belt in many forms of martial arts.

Apart from your skills and technique execution, the opinion of the instructor and the student also matters. It depends on the coach too, if they find you good enough for promotion. As per the International Brazilian Jiu-Jitsu Federation (IBJJF), a black recipient should be at least 19 years of age. The holders of this belt are often referred to as ‘professors’ in many schools.

Aikido is a Japanese self-defense martial art where you can get a black belt in 4-5 years. 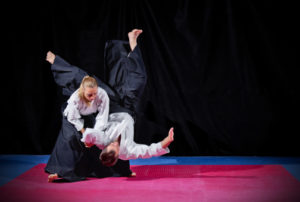 This period can increase or decrease as per the student’s performance. It also follows the kyu and dan ranking system. Apart from being a consistent student at the school, you need to have a proper mindset and behave in a certain way to get the belt. Your instructor will also judge you based on your mindset and then decide to promote or fail you. It also depends on the school and the sort of training they offer.

If you have training in other martial arts, you can attain a black belt in Aikido in about 2 years. In many schools, the students should be at least 16 years of age before they receive a black belt.

To sum it up, the Brazilian Jiu-Jitsu black belt takes the longest time to attain. You will have to work hard and train regularly for 10 years to get this belt. However, in any martial art, apart from your performance, your dedication, consistency, and even mindset also matter to achieve the black belt. Your instructor won’t push you to take a test unless you are ready. The stress and performance anxiety can lead to a failure in the test. You need to focus and have patience during the process and shouldn’t wish to earn a belt just for the sake of it.