When MMA didn’t exist, it was Vale Tudo that introduced us to martial arts. A hybrid combat sport, Vale Tudo was born and bred on the streets of Brazil. It laid the groundwork for many martial arts that exist today, especially Brazilian Jiu-Jitsu. We owe it all to Vale Tudo.

From its history to how it led to the evolution of MMA, here’s all you need to know about the sport.

What Is Vale Tudo?

Vale Tudo is a Brazilian combat sport that is quite similar to mixed martial arts (MMA). The term “Vale Tudo” translates to “anything goes” in Portuguese. It was a fight between two different disciplines of martial arts. The matches were no-holds-barred fights and had no rules or time limit.

Vale Tudo became really popular in Brazil in the 1900s. In the 1920 and ’30s, Vale Tudo was more like a street fight than a sport. 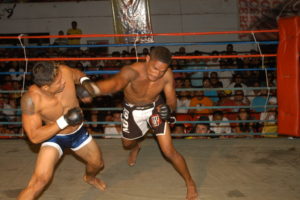 It started as a sideshow in carnivals. It was quite similar to catch wrestling in the United States. Here, fighters from different disciplines were pitted against each other to find out which one was superior.

As different martial arts styles were being practiced in Brazil at the same time, it gave way to many rivalries. An act of “dojo storming” became quite famous, where the martial artists would storm right into rival athletes’ academies and challenge for a fight. In many cases, they’d have a fight on the streets.

The circus promoters used their rivalries as a way to make money. So they suggested the martial artists to fight a Vale Tudo match with no rules. They’d hold paid shows for the spectators while the fighters would try to prove themselves. This was up until the 1950s when Vale Tudo traveled around with circuses.

But the nature of the sport was branded as uncivilized, so it was divided into parts: One that followed the new rules and the other part had to move underground. There is no record of these underground Vale Tudo fights.

The rules in the 1990s were meant to establish Vale Tudo as a legitimate sport in the martial arts arena. This was the time of the rise of the Ultimate Fighting Championship (UFC), which played a crucial role in the modification of Vale Tudo. The sport was also introduced in Japan as Vale Tudo Japan. During this time, prominent organizations such as the International Vale Tudo Championship and World Vale Tudo Championship were formed. They were also featured on Brazilian TV.

In the 2000s, more promotions adopted the new rules of Vale Tudo, while some continued with the traditional rules. Vale Tudo events are still quite common in Brazil, with no-rules underground events inviting plenty of criticism from the media.

Vale Tudo didn’t have any rules when it started and this is one of the reasons it didn’t get too much traction. Except for weapons, everything was allowed in the fight, which is fought either in the ring or even in open spaces. In the ’90s, it moved to cages.

The participants didn’t wear gloves during the fight. As these fights had no time limit, they could only end either through knockout, submission or until the opponent is injured or quits.

However, now there are a few new rules to make the sport safer. The fighters are required to wear gloves, and head butts, eye gouges, groin strikes, hits on the neck or throat are prohibited. These rules were added to avoid life-threatening injuries to the participants. However, there are still many events that do not follow these rules in Brazil. 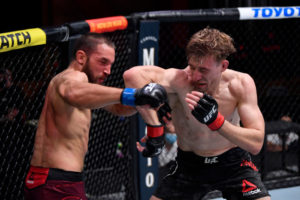 Vale Tudo is a combination of different martial arts disciplines like Brazilian Jiu-Jitsu, Combat Sambo, Judo, Boxing, Muay Thai, and Catch Wrestling. The athletes can use wrestling techniques like throws, leverages, joint locks, and striking techniques. However, as the sport has only limited rules even today, except groin and neck strikes, the athletes are allowed to use any technique on their opponents.

The martial art academies have come up with their own techniques. They are a mix of various combat sports to train their students in Vale Tudo.

Here are a few most noteworthy athletes who Vale Tudo:

Jiu-Jitsu champion, Rickson Gracie is one of the best the Gracie family has to offer after his dad, Hélio Gracie, who was also a renowned Vale Tudo fighter. Rickson fought hundreds of Vale Tudo fights and won all of them. His fights with the Japanese pro wrestler Yoji Ano, and with the Luta Livre practitioner Hugo Duarte, whom he beat twice, are the most notable.

Kimura won several titles in wrestling and Judo. In 1951, he defeated Hélio Gracie in a BJJ vs. Judo Vale Tudo fight. To honor his exceptional win, Jiu-Jitsu fighters named a move, “kimura” after him.

Nicknamed “Rei das Ruas” which means king of the streets, Ruas started his career with Vale Tudo fights wherein he represented Luta Livre. He later took up BJJ and defeated the best martial artists in the world. UFC 7 tournament was his most notable win.

The Brazilian Jiu-Jitsu practitioner introduced BJJ to America through his superior performance in the UFC Vale Tudo tournaments. In 1993, he beat Gerard Gordau with a rear-naked choke and went on to become the first-ever UFC champion. He gave a new meaning to his family’s martial art style.

Brazilian catch wrestler and founder of Luta Livre entered the Vale Tudo events in the 1930s. He was also a pro-submission grappler. He won various matches and also defeated George Gracie of the Gracie family.

Vale Tudo played a crucial role in familiarizing the world with Brazilian Jiu-Jitsu, the martial system developed by the Gracie family. They used the Vale Tudo events to prove the superiority of their martial art style.

They issued challenges to anyone who could beat them, which later came to be known as Gracie challenges. The challenges were printed in the mainstream newspapers of Brazil by Carlos Gracie. He offered monetary prizes to the fighters who would defeat the Gracies, which attracted many prominent athletes to join them in the ring.

Hélio Gracie also competed in these Vale Tudo fights, followed by Rickson Gracie. Later, Hélio’s other son, Rorion, introduced the sport in America when he opened a martial arts school in California. This led to the evolution of MMA through Vale Tudo fights.

Rorion Gracie wanted to popularize the Gracie Jiu-Jitsu or BJJ, as we call it today in the United States. He and his students participated in Vale Tudo fights and put them on tapes, demonstrating the techniques of BJJ.

With the introduction of pay-per-view, he wanted to take Gracie Jiu-Jitsu in Vale Tudo style on air. He partnered up with Art Davie, a reputed entrepreneur to televise the tournament and named it the Ultimate Fighting Championship (UFC). He invited his brother Royce Gracie, who was unbeatable and proved BJJ supremacy in the country.

Thus began the journey of BJJ, being the most renowned component of MMA. But soon, UFC drifted away from the Vale Tudo-style fights with no rules and limits for it to thrive in the MMA world.

Although the Gracies started off with taking forward their BJJ legacy through Vale Tudo, they led us to discover mixed martial arts. If it weren’t for Vale Tudo, MMA would not have been so popular with a fan base this huge. It is still an inherent part of martial arts and will continue to be so forever.