Proper fighting stance is the foundation of every Muay Thai move.

A good solid stance is all you need to get the stability as well as the power to send powerful kicks and blows to your opponent, while still maintaining the balance to defend yourself adequately.

The development of Thai boxing comes with many similarities from Muay fighting stances. In fact, a good number of instructors are currently using modified versions of western boxing as a standard in Thai boxing.

But back in the days, Muay had its set of rules and regulations that guided how every practitioner protected themselves and advanced attacks.

In Muay Thai fighting, a proper stance features very specific positions for both the arms and the feet.

The goal of a proper stance is to allow the fighter to create the best conditions for total body defense, efficient footwork, and the generation of powerful attacks.

Expert Muay Thai masters have in their arsenal a variety of positions that can be applied in varying fighting scenarios. In Muay Thai, the general goals of a proper fighting stance include:

Proper Positioning of the Feet 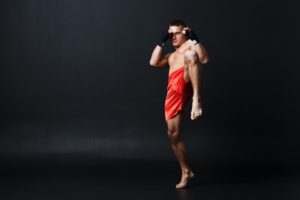 The position of the feet forms the most important foundation upon which the entire Muay Thai fighting system is based.

According to traditional Muay Thai fighting rules, it is normally assumed that one can adopt one of the following three postures for their feet.

From the first to the third position, your ability to react to external stimuli increases gradually. The three-point support position is usually considered as the mother of all Muay Thai fighting stances.

This is because it comes with the capability of creating a pillar upon which all the technical standards of this fighting style are built.

With this position, your feet should be about shoulder-width in distance.

Your rear heel should also be positioned slightly away from the floor, with the knees slightly bent so that you have the ability to spring back and forth or to the left and right with a lot of ease.

Also, your rear and front knee should be raised slightly to form the lower wall that will protect your groin area from attacks.

Proper Positioning of the Arms 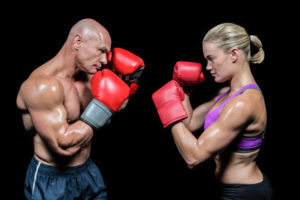 In traditional Muay Thai, the body, when in a proper fighting stance, can be divided into several triangles.

Each corner of the triangle can be used as an independent weapon that can be used for attacking opponents or defending the body.

With the proper guard position, you get the versatility to use these “weapons” efficiently and correctly and without spending a lot of your energy.

As a rule of thumb, with the adoption of the right stance, your chin must be tucked in so that it can offer proper cover to your throat.

Your hands should be in front, with the elbows being as close to the body as possible. For you to remain on your feet while you make maneuvers such as attacks and grabs, it is vital that you take total control of your center mass all the time.

You do this by keeping your feet apart, knees slightly flexed and your upper body must be arched towards the front slightly.

Additionally, your chest must be in the same line right above your knees. This is a great way to ensure that you stay properly rooted at all times.

This stance was structured by Professor Chaisawat. His main objective was to come up with a stance that would guarantee maximum offensive and defensive efficiency in a typical Muay Thai encounter.

With this stance, the fighter has the versatility to bounce out of the opponent’s line of fire while at the same time being able to launch counter-attacks with either leg or arm strikes with enviable efficiency.

A fighter who decides to use this stance has more concern than just power. This is because it allows for easy maneuverability such as quick steps to the sides, dodging, and smooth simultaneous counter attacks without worrying about losing balance.

There are various variations of the Muay Lopburi fighting stance. The basics of the stance, however, feature a very unique hand position.

With this stance, you turn the fists together with the palms facing upwards. You then bend the arms at the elbow region with both arms in a relatively lower position.

This position shares very strong similarities to the traditional bare-knuckle boxer’s guard that was in place before gloves were introduced into the sport.

One of the benefits of this posture is that it allows you to move your hands quickly, besides allowing you to quickly and efficiently launch the upward swing punch.

This stance also allows for the perfect distance between the two feet so that you can generate quick footwork and balance while you maneuver around.

Muay Korat Stance is structured to condition the fighter to make quick and efficient attacks.

The stance encourages quick and aggressive forward movements as well as extreme power in both the hands and the legs.

To achieve all these, this is a highly offense-oriented stance. With it, the body weight is always on the front leg.

The hind leg, on the other hand, is strongly rooted on the ball of the foot. The knees bend slightly, with both feet not too far apart – this is to allow for quick footwork into your opponent’s space.

The fists are held approximately at the breast level, and with the forearm almost outstretched, you get to guard yourself easily while without losing the ability to launch quick attacks on the opponent.

This stance allows for aggressive defensive maneuvers, while at the same time facilitating lethal counter-attacks.

It is a combination of different styles, with its main feature being that the distance between the rear and the front foot is slightly larger in comparison with most of the fighting stances already discussed above.

With the positioning of the arms, there will be an adequate protection for the vital areas within the upper body.

One of the admirable things about this stance is that it allows for the execution of powerful leg and hand strikes.

It can be likened to a durian fruit – if you get close enough, you will get hurt because of the long and protective thorns.

This stance was designed to allow for maximum protection. With it, the body is divided into two halves as well as into lower, middle, and upper areas.

With these divisions, you get to define various body weapons that you can deploy in varying fighting situations.

For example, the lower quadrants are protected by the legs while the middle and the upper quadrants rely on the arms for protection.

The stance also guarantees the economy of motion, leading to quick and lethal offensive maneuvers.