Muay Thai is an ancient combat sport. Today this martial art form is extremely popular owing to the growing interest in mixed martial arts. Does Muay Thai have belts and a ranking system like the other martial art forms? How are the fighters ranked?

Why is a Ranking System Necessary?

Martial arts have many forms. Muay Thai, Judo, Karate, and Jiu-Jitsu are some popular examples. These combat sports are a great way to discipline and condition your mind and body. They also train you in the art of attack and self-defense.

Most martial arts have a ranking system with belts being the most common. When training in these martial art forms, you will appear for evaluations through your training period and earn belts depending on your levels of expertise.

The different colors of belts signify your level of expertise. The colors range from 0white to black, where white is for beginners and black is the highest ranking in most martial art forms.

With the evolution of various MMA tournaments, the belts have gained significance. They act as passports to enter MMA combats and cage fights.

The Origins of Muay Thai

Muay Thai or Thai Boxing, a traditional martial art form from Thailand differs in its ranking systems. This martial art form is steeped in history, and the origins are unclear. We know that this Boxing form was developed by the ancient Siamese (Tai) tribe as a way of self-defense against invasions.

Traditionally, the art of Muay Thai was passed on from generation to generation, from fathers to sons and from teachers to trainees.

In the kingdom of Thailand, the kings and emperors continued to encourage this martial art form. Muay Thai has evolved from a combat sport to a learning system, instilling discipline and teaching self-defense techniques to students.

Read more about the History of Muay Thai.

Does Muay Thai Have Belts and Ranking System?

Traditionally, Muay Thai didn’t have a ranking system. The fighters let their performance and their fight wins speak for their expertise. Hence, the focus was on winning competitions and not earning belts.

In the modern world, Muay Thai associations and training federations are developing their own Muay Thai Belts and Ranking Systems. This encourages students and trainees to perform to the best of their abilities.

Prajioud or armbands hold great significance in Muay Thai. Traditionally, these armbands were an important part of wars. These were tied on the hands of the warriors by their mothers, who would tear out a piece of their clothing and tie it to their sons’ arms before the sons left for the war.

The armbands or Prajiouds were the mothers’ way of wishing good luck and safety for their sons during the war. 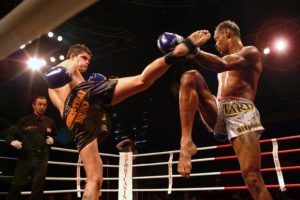 As time passed, Prajioud became a way of the teacher initiating their students into the world of Muay Thai wishing them good luck on their journey ahead.

For a traditional Muay Thai fighter, the armband isn’t simply a piece of cloth. It connects them spiritually to the sacred martial art.

This belt is worn only before and after fights. Fighters don’t wear them during practice sessions or the daily routines. Irrespective of their Muay Thai rankings, all fighters wear the same bands.

Sometimes these bands may contain bone fragments of Muay Thai elders or elders blessed by monks.

In the modern world, however, this system has changed. With the westernization of Muay Thai, this martial art form has seen the introduction of ranking systems.

The Armband Ranking is still evolving with different federations following different standards for their students. Students get a pair of bands, one for each hand. The color depends on their Muay Thai grading system.

We have listed one example for the Muay Thai Armband Ranking System below: 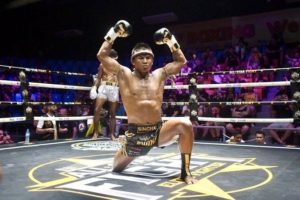 In this context, Khan is the name given to the student level.

The WTBA, USA, has developed its ranking system, and this is followed by many training centers and affiliates.

Their Muay Thai Armband Ranking System is as follows:

As of now, there is no standardized curriculum for learning Muay Thai. It is still evolving with time. Instructors and tutors use their experience and judgment to decide the expertise level of the trainees.

This training academy is well respected world over. The academy has highly experienced trainers, some of whom are former and current champions as well.

The Ranking Levels are listed below: 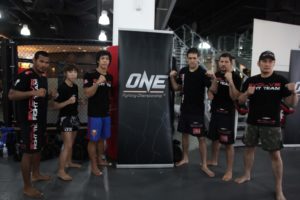 Does Muay Thai have a Belt System?

The Belt System is not a traditional ranking method in Muay Thai. But modern training associations are evolving their ranking systems. Some associations and federations use belts to rank their students.

As an example, the Muay Thai Belts and Ranking System developed by the Kry Muay Thai Association and the Association Institute of Thai Martial Arts is listed below. The list shows the student/teacher levels along with the belt colors.

Another example is the Roufusport Kickboxing Association. This training federation has some notable black belt winners who train the students in Muay Thai.

This association has a rather simple system of awarding belts, which goes from simple to expert as mentioned below:

As we have seen, different training institutions and gyms have different Muay Thai Belts and Ranking Systems. Each association has evolved its system unique to the students and training conditions.

The Future of the Muay Thai Belt and Ranking Systems:

Many institutions are trying their best to popularize Muay Thai across the world. Various MMA tournaments can also be credited with bringing out this relatively unknown martial art to the limelight.

With multiple grading and ranking systems present in the world of Muay Thai, there is a need to bring a unified system. This will bring more weightage to this martial art form and improve its popularity.

Muay Thai, once limited to Thailand, is gaining a stronghold across the world. For Thai people it is a way of livelihood and a form of self-defense. Many learn this martial art form only to teach it to others.

The increasing popularity of MMA is one of the major reasons for the popularity of Muay Thai. Martial art forms such as Karate, Judo, and Jiu-Jitsu, place importance on ranking and belts.

Does Muay Thai have a Ranking System?

Traditional Muay Thai didn’t have a ranking system. Fighters were graded based on their experience and fight wins. In the modern world, training associations and federations are evolving their ranking systems.

Are there Black Belts in Muay Thai?

Muay Thai has black belts, and these are offered at the instructor levels. However, these are not the highest ranks. Gold belt is at the highest level, followed by silver and then black.