Mixed Martial Arts (MMA) is a dynamic and exciting combat sport, which is gaining immense popularity.

The peculiarity of MMA is that it is a combat sport in which fighters of any martial arts discipline, boxing, karate, jiu-jitsu, wrestling, or judo, can compete under a set of rules. And, three judges decide the winner of an MMA fight.

It often happens that the audience of a fight questions the judges’ decision regarding the winner as they fail to understand how judges evaluate MMA fights.

If you see your favorite fighter dominating at the beginning or end of a fight, refrain from concluding that he/she will be the winner, as judges use multiple criteria to decide the winner, which you might be unaware of. In the end, you might not see your favorite participant winning because you cannot figure out how the judges scored the fight round by round.

Contrary to your belief that superior performance will make a participant the winner, judges score an MMA fight on factors, like striking, grappling, body control, and aggressiveness. And that is why you might disagree with the judges’ decision that is based on a set of unified rules, and certain scoring criteria.

The Unified Rules of MMA 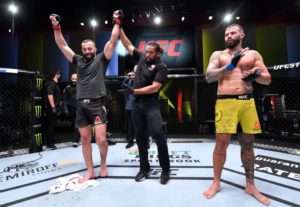 The scoring criteria for MMA fights in the UFC are a simple set of norms. Impactful striking and grappling that result in a finish is the priority for judges. Fighters causing damage to opponents is an important point of scoring an MMA fight. But immediate damage scores more than cumulative damage. Meaning, a strike, such as a devastating punch that brings the opponent to the ground, will score more than hitting the opponent repeatedly in a combination of different strikes, such as kicks or punches.

Aggression is not that important when it comes to judges scoring an MMA fight. They count aggression only if it leads to ending the fight.

Chasing an opponent, defending, and evading strikes contribute in no way to the scorecard.

Judges consider controlling the fighting area as an important yardstick to score the fight. But, the striking, grappling, and aggression levels of both fighters should be equal.

Controlling implies dictating the location and the speed of the fight.

Judges score an MMA fight on a 10–9 system. Meaning, they award the winner 10 points and 9 points to the loser. However, the figures can change if significant damages or fouls took place in the fight.

Notably, 10–10 is the rarest score, which indicates that both the fighters were equal in every aspect of the MMA fight, and neither of them had an advantage over the other nor fouled the opponent to elicit any point deductions.

The most common score, i.e., 10–9 indicates that one fighter had advantages over the other but was not able to end the fight during the round. And there was no excessive dominance from any of the fighters during the fight.

A 10–8 score shows that one fighter was dominant in the round to the extent of nearly finishing the fight, and the other fighter defending continuously without being able to strike back or advance his/her position when grappling.

Fighters also lose points if they commit fouls. But, they do not lose the round if they lose points by committing fouls. Judges deduct points at the end of the round. Say, a fight ended with a 10–9 score. Judges will change the score to 9–9 to reflect the occurrence of the foul in the fight.

Once an MMA fight ends, there can be different decisions based on the scores of judges. Here are the possible decisions:

All three judges decide the same fighter to be the winner.

Two judges decide one fighter as the winner, but the third judge decides the fight as a draw.

All three judges decide the fight a draw.

Two judges decide the fight a draw but the third judge decides one fighter to be the winner.

One judge decides the fight a draw, but the other two judges decide one winner each.

Why Do Controversial Decisions Arise? 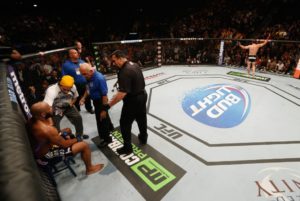 Due to the existing scoring system, which is not perfect at all, judges often disagree with one another. Also, it is human nature to focus more on bad things, so people tend to point out the bad decisions. As such, some judges are known for incompetency rather than competency. Several things come into the picture when people attribute anomalies to judges.

Another reason behind the controversial decisions is that gaming commissions do not have exclusive judges for MMA fights. They often engage boxing judges to judge MMA fights. As such, there arises the possibility of misinterpretation of a knockdown. Often, judges treat a successful takedown as a knockdown.

The notable aspect is that a knockdown in an MMA fight does not automatically merit a 10–8 score.

Often, a knockdown or takedown can result in the fighter winning the round only in the absence of any dominating response by the opponent.

Besides, there are instances of spectators targeting judges based on their reasons.

Flaws in the 10 Point Scoring System

Instead of solely holding the judges responsible for the disagreeable decisions, you should also consider the existing flaws in the 10 point scoring system, which has been taken from boxing and applied to MMA.

While the system works fine for boxing, it elicits some issues when applied to MMA fights.

The most prominent issue is the difference in the number of rounds in a boxing and MMA fight. A typical boxing fight lasts for 12 rounds, but an MMA fight is of three rounds except for title fights that are of five rounds.

In an MMA fight, things are a bit different. If a participant loses the first round, he/she has to win the second round, or else there will be no chance of winning the fight, even if the third round ends in a win, which will result in a draw. Similarly, a fighter who wins one out of the first two rounds must win the third round to win the fight.

Furthermore, an MMA fight has more variables compared to boxing. It includes three fighting aspects—striking, grappling, and clinching—that show that the fighters use more weapons than boxers. As such, the 10 point scoring system is not that great for scoring MMA fights.

It is not fair to criticize judges for their decisions because they do not deserve the kind of hate people throw at them. People should try to understand that judging an MMA fight is a tough job. Although they score an MMA fight based on a set of pre-defined criteria, the final decision is on how they assess the fight. So, it is where judges are likely to manipulate things a bit, and the eventual decision might be contrary to the spectators’ expectations. But, most of the time, they judge an MMA fight right.