Ultimate Fighting Championship (UFC) is the leading mixed martial arts promotion in the United States. UFC has held over 500 events in the last three decades and has never disappointed its audience.

Undoubtedly, the UFC houses the most talented MMA fighters. In 2013 the ring was opened for female MMA fighters, Ronda Rousey became the first female fighter to sign with them. Currently, they have 129 active female athletes under their promotion who compete in four weight divisions.

From their grappling techniques, strikes, punches to killer instincts, the UFC female fighters are highly skilled in every aspect. In this article, we will look at the top 10 female MMA fighters in the UFC octagon. 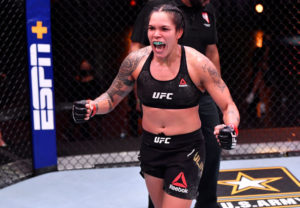 Amanda Nunes is numero uno on almost all ranking lists on the internet in 2021. The Brazilian mixed martial artist competes in UFC’s Bantamweight and Featherweight divisions and is currently the reigning champion of both. Also, she is placed No. 1 in UFC women’s pound-for-pound rankings.

Nunes is a real powerhouse of talent and is equipped in several martial arts. As a kid, Amanda started off with practicing Capoeira, an African martial art. She took up karate when she was 7, Brazilian Jiu-Jitsu and boxing at 16, and later Judo. She started competing in BJJ tournaments, winning several titles. She is currently a BJJ black belt holder and a brown belt in Judo.

She started training for MMA in 2007 and made her professional debut a year later. She was defeated in her first fight but quickly came back, recording several wins after that.

She entered UFC promotion in 2013 and continues to be one of their best fighters ever since, with many titles to her credit. Out of 25 matches she has fought to date, she won 21 of them.

Nunes keeps ranges and leg kicks to keep her opponents at the end of her strikes. She has won 13 of her matches by knockout. She is scheduled to go up against Julianna Peña on August 7 in UFC 265.

Joanna Jędrzejczyk’s flawless strikes and sprawl-and-brawl approach are the reason for her to be on the list of best UFC female fighters. She is a Polish mixed martial artist who competes in the Flyweight and Strawweight division of UFC.

She is a former Muay Thai kickboxer and has competed in the national and European tournaments of the sport. She began training for it at 16 and pursued it for 10 years, winning over 60 matches.

Her fighting style is undoubtedly Muay Thai and kickboxing. She made her professional MMA debut in 2012, defeating Sylwia Juskiewicz via a unanimous decision. She officially signed with UFC in 2014.

Jędrzejczyk became the first UFC title-holder from Poland and the first female European UFC champion in 2015. She defeated Carla Esparza via TKO in the second round for the title.

She has fought in 20 MMA matches to date, out of which she has won 16. Currently, she is No. 2 in the UFC women’s strawweight rankings and No. 5 in UFC women’s pound-for-pound rankings. 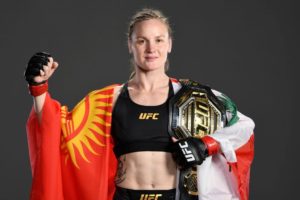 Valentina Anatolievna Shevchenko is a Kyrgyz-Peruvian MMA fighter. She is also a former professional Muay Thai fighter. She competes in the UFC‘s Flyweight division. She is currently ranked No. 2 in the UFC women’s pound-for-pound rankings.

She has defeated the best of the best fighters in the ring, including Joanna Jedrzejczyk, Jennifer Maia, and Liz Carmouche.

She started training for Taekwondo at five. At 12, she entered Muay Thai kickboxing and later freestyle Vale Tudo. She began her career in kickboxing in the year 2000 when she was 12 and defeated a 22-year-old opponent. This is when she got her nickname, “Bullet”.

Shevchenko won 50 amateur and pro-Muay Thai and kickboxing matches in the period between 2003 and 2015. Her professional debut as an MMA artist also began in 2003.

She began her career in UFC promotion as a last-minute replacement. Her debut match was a split decision victory over Sarah Kaufman. She is known for her counter strikes and her ability to gauge the distance of the opponent’s attacks. She is an accomplished grappler with a black belt in Judo.

Her fighting style is Muay Thai, boxing, and kickboxing. She has fought 24 matches to date, winning 21 of them. 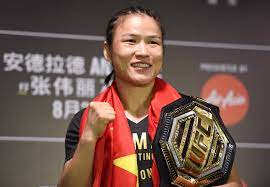 Zhang Weili is a Chinese mixed martial artist who competes in UFC’s strawweight division. She is the first Chinese and East Asian Champion in promotion history. Currently, she is No. 1 in UFC women’s strawweight rankings and No. 4 in UFC women’s pound-for-pound rankings.

As a kid, she started training for Shaolin Kung Fu, moved on to Sanda, Shuai Jiao, a Chinese wrestling style at 14, and then to Brazilian Jiu-Jitsu before finally transitioning to MMA. She made her professional MMA debut in 2013. After losing the first fight, she went on to win 11 consecutive matches.

Her first fight in UFC was against Danielle Taylor, where she defeated her via a unanimous decision. She not only received the Performance of the Night award then but also became the new strawweight champion.

Zhang has fought 23 matches to date, out of which she has won 21, 10 by knockout, 7 by submission, and 4 by decision. Her fighting style is Shaolin Kung Fu and Brazilian Jiu-Jitsu. 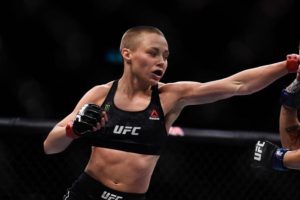 She is the first female MMA fighter to lose and then regain the UFC belt. Currently, she is also the No. 3 UFC women’s pound-for-pound rankings.

Rose started practicing taekwondo when she was 5. Later, she went on to practice karate, BJJ, and then took training in kickboxing and martial arts. She began as an amateur in 2010 before making her professional debut in 2013 against Emily Kagan under Invictus promotion.

Later that year, UFC signed her along with 10 other strawweight fighters to take part in The Ultimate Fighter season 20. Although she lost the match against Joanne Calderwood, she was awarded two seasons $25000 bonus for Performance of the Season and Fight of the Season.

She has fought in 14 matches to date and won 10 of them. Namajunas uses forward movements whilst pressurizing the opposing contender with jabs and high kicks. Her advanced technical striking and footwork using different angles and adjustments is something that sets her apart from her competitors. 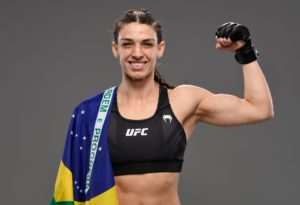 An American mixed martial artist and a Brazilian Jiu-Jitsu practitioner, Mackenzie Lynne Dern Santos signed with Ultimate Fighting Championship in 2018. She is currently ranked No. 5 in UFC women’s strawweight rankings and No. 12 in UFC women’s pound-for-pound rankings. She made her debut in UFC against Ashley Yoder in 2018 and won the fight via a split decision.

She began training at 3, and by the time she was 14, she started competing in the adult division. She marked her professional debut in 2016.

She takes after her father, Wellington “Megaton” Dias, a renowned grappling competitor, and is herself known for her grappling credentials. Therefore, she is one of the most dominant female MMA fighters in the UFC at present.

Her recent fight with Nina Ansaroff won her the Performance of the Night award. Her fighting style is Brazilian Jiu-Jitsu. She has fought 12 matches to date and won 11 of them. Her only loss was against Amanda Ribas. 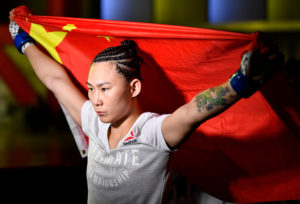 Yan Xiaonan holds the honor of being the first Chinese mixed martial artist signed by Ultimate Fight Championship. Currently, she is No. 3 in the UFC women’s strawweight rankings and No. 11 in UFC women’s pound-for-pound rankings.

She began her training at 13, and her background is in Sanda, Chinese kickboxing. She switched over to MMA in 2015 and entered the octagon in 2017.

In her debut fight at UFC Fight Night: Bisping vs. Gastelum, she went up against Kailin Curran and won by a unanimous decision. Out of the 15 matches she has fought to date, she won 13 of them with 1 ending in no contest.

Although Yan Xiaonan isn’t in the news as much as her fellow fighters, she is one of the most promising fighters in UFC promotion and has won 6 matches with them. She is currently on a six-streak win. Her fighting style is Sanda, and she is soon going to go against Carla Esparza at UFC Fight Night 188. 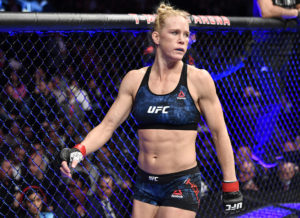 An American mixed martial artist, Holly Holm is a former UFC Women’s Bantamweight Champion. She signed with UFC in 2014 and has competed in renowned promotions before that. At present, she is ranked No. 2 in the UFC women’s bantamweight rankings and No. 8 in pound-for-pound rankings.

As a former professional boxer and kickboxer, she has several titles to her name. She made her MMA debut in 2011. Currently, she is the first and only fighter to hold a world boxing title and a UFC title.

Her fighting style is boxing and kickboxing. She has competed in 18 professional MMA fights, winning 13 mostly by knockout.

Her most remarkable win was in UFC 193 in 2015 when she defeated Ronda Rousey for the first time. The fight happened in Melbourne with a record-breaking crowd of 56,215 people, where Holm won the bantamweight title.

Holm uses lateral movements while landing stiff jabs on her opponent’s head. She is known for punching combinations that work with the opponent up against the cage. She also uses side, oblique, and high kicks to attack them. 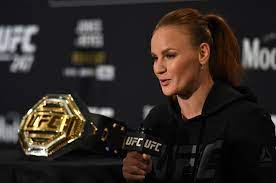 She signed with UFC in 2018 after being with Invicta Fighting Championships for five years. Currently, she is No. 4 in the UFC women’s flyweight rankings.

She debuted as a professional MMA artist in 2009, winning her first four fights in the first round. She won three by submission and one by TKO.

Maia’s fighting style is Muay Thai. She started training at 15 and fell in love with martial arts. She has several national titles to her name in Muay Thai. She won the Performance of the Night award in 2020 after she defeated Joanne Calderwood via armbar submission in the first round itself.

She is a former professional boxer, having played three matches and winning all of them. This was a year-long stint before she switched to MMA. She has competed in 26 MMA fights, winning 18 of them. Maia is scheduled for a match against Jessica Eye on July 10. 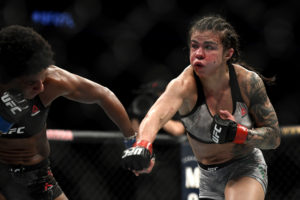 A Brazilian mixed martial artist, Ana Cláudia Dantas Gadelha, officially signed with UFC in 2013. She fights in the strawweight division of the promotion. Currently, she is No. 8 in UFC women’s strawweight rankings and No. 14 in UFC pound-for-pound rankings.

She is also a professional Brazilian Jiu-Jitsu practitioner and is the youngest BJJ black belt in the history of Nova União, a Rio de Janeiro BJJ academy. Here she trained under José Aldo, former UFC featherweight champion.

She made her pro-MMA debut in 2008 in a Force Fighting Championship 1. She fought against Elaine Leite and won in 17 seconds via an armbar. Her fighting style is Brazilian Jiu-Jitsu.

In her first fight at UFC in 2014, she faced Tina Lähdemäki at UFC Fight Night: Cerrone vs. Miller, and won the match via a unanimous decision. She has fought 23 fights to date, out of which she has won 18.

The Ultimate Fighting Championship always brings out exceptional talent in their banner. Their fierce female fighters put on a jaw-dropping performance in the ring, leaving the audience spellbound.

There are many exciting fights scheduled in the coming months in the UFC. They’ll be something to look out for.