Jiu-Jitsu immediately reminds us of Brazilian Jiu-Jitsu. The term “Brazilian” has been a part of the martial art style since forever, and we haven’t ever considered them separate. But lately, a not-so-new term “American Jiu-Jitsu” or “AJJ” has divided the MMA athletes in Brazil and America.

Whenever you think of AJJ, you cannot help but talk of Keenan Cornelius, the American martial artist. The recent movie by FloGrappling has once again sparked the debate on AJJ vs. BJJ. They interviewed a few MMA artists and brought forth their views on the topic. Unsurprisingly, Keenan’s interview generated the most heat out of all.

Here’s all you need to know about American Jiu-Jitsu and the controversy surrounding it.

American Jiu-Jitsu Background: What Is It? 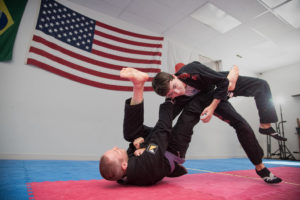 There is no clear definition of what American Jiu-Jitsu is as such. The academies teaching it in the States have come up with their own explanation for their students.

According to the AJJ Maplewood, American Jiu-Jitsu (AJJ) is a self-defense art in which the artist learns to respond to realistic situations. It employs the principles of physics, balance, and knowledge of human anatomy. The combination of proper timing, footwork, and body positioning for prompt results in attack neutralization without the use of strength.

AJJ is also considered a cross-training approach for the athletes with a wrestling background who took up BJJ professionally afterward. This includes several renowned names like Ricardo Arona, Royler Gracie, and Amaury Bitetti among others who used to cross train in the 1990s and 2000s.

How Is AJJ Different From BJJ?

Jiu-Jitsu is an ancient martial art that traces its origin to Japan. Having undergone several evolutions in Brazil, it is now known as Brazilian Jiu-Jitsu (BJJ), where it is still called Jiu-Jitsu. The term “Brazilian” was added when the martial art was introduced in the United States to differentiate it from the already existing styles.

The difference between AJJ and BJJ is quite unclear. In an interview with

FloGrappling earlier this year, Keenan Cornelius, explained AJJ as a title for Americans competing in the Brazilian Jiu-Jitsu competition. Apparently, he finds “American Brazilian Jiu-Jitsu artist” cumbersome to pronounce. The audience’s reaction to it wasn’t pleasant. This is nothing like what Jake Shields meant when he announced AJJ as his fighting style, which for him is a blend of BJJ and American wrestling. 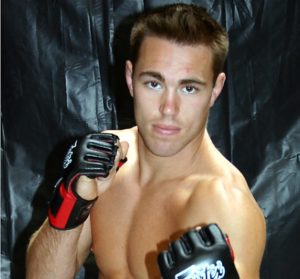 Any discussion about American Jiu-Jitsu is incomplete without mentioning Jake Shields, an American mixed martial artist. He used the term to describe his fighting and grappling style and later got its tattoo inked on his forearm. This involves combining Brazilian Jiu-Jitsu submission techniques with the explosive takedowns, throws, and transitions of wrestling.

In 1994, the Massachusetts Institute of Technology (MIT) offered a self-defense course on AJJ, which is still a part of the MIT Club Sports. They learn and practice Jiu-Jitsu or “gentle art” as they call it through a variety of techniques. This includes “joint locks, submission holds, throws, strikes, weapons use and unarmed weapon defense (gun, knife, blunt weapons), and ground-defense” and also the de-escalation techniques and strategies. 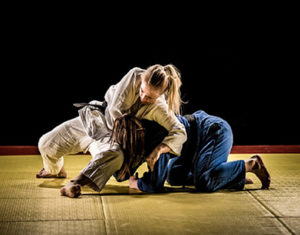 However, the term was not used for the first time in both of these instances. In 1922, author Len Lanius published a book titled “American Jiu-Jitsu,” a name to describe the system of self-defense he had developed after close study. But one cannot say if this is the first time this term was used.

But we cannot also overlook the American influence on BJJ over the past few decades. Cornelius’ lapel guard, Musumeci’s crab ride, and Danaher Death Squad’s advancements in leg-lock techniques are just a few examples. BJJ certainly has an American touch to it in the country.

AJJ vs. BJJ: Let’s Take a Deep Dive Into Controversies

When Jake Shields announced AJJ as his fighting style about a decade ago, there wasn’t any backlash from the Jiu-Jitsu community as such. But Keenan couldn’t escape the pushback from the community.

In 2019, after the fall out with his head instructor, Andre Galvao at Atos BJJ, Keenan opened up his own training academy and named it Legion American Jiu-Jitsu. This pissed off many Brazilian Jiu-Jitsu practitioners who felt that he was disrespecting the traditional martial arts by using AJJ in the name of his academy.

He named it Legion American Jiu-Jitsu to set his academy apart from other BJJ academies in the country. He also pointed out that most academies have Brazilian instructors, and it can cause language barriers and cultural differences, which could affect the athletes’ training. Therefore, he has hired American instructors and made the whole American theme Legion’s selling point. This can be viewed as his attempt to “Americanize” Jiu-Jitsu.

In other controversies, his comments in Matburn’s podcast about Rickson Gracie where he said that Jiu-Jitsu back in Gracie’s time was not as good as compared to today. He even went on to say that their level was probably purple belt, intermediate belt ranking in BJJ. Although he meant that we cannot compare the Jiu-Jitsu from different eras with each other, his wrong choice of words met with wide criticism. He again upset BJJ athletes, and it also led to an AJJ vs. BJJ online feud.

This was not it. He also commented on the strict uniform code of the BJJ institutions and declared that such policies won’t be implemented at Legion.

The term American Jiu-Jitsu has really caught on in the United States in the past few years. Apart from Keenan’s Legion American Jiu-Jitsu academy, quite a few Jiu-Jitsu schools are teaching the style in the country. The AJJ Syndicate is a group formed by these academies. Other than this, we have the AJJ Maplewood Academy, Theodorou Academy of Jiu-Jitsu, and so on.

These academies have roped in top Jiu-Jitsu instructors. Keenan has brought in top MMA athletes like Darin Conner DeAngelis and Andris Brunovskis. Interestingly, Darin Conner DeAngelis also used to train at Atos San Diego HQ, Keenan’s former academy. DC reconnected with the latter during the COVID-19 lockdown and discussion over financial problems led him to make the switch. “I realized that moving to Legion was the best way to calm my mind, learn from him, learn how he created this amazing online success and already a very successful gym,” he said in an interview.

Other than this, Shihan Tony Avila from AJJ Maplewood Academy was a part of the 1994 batch of the MIT AJJ self-defense program. Now, as the head of American Jiu-Jitsu instructor at the academy, he has trained several students in the style.

To sum it up, we cannot ignore that the term “American Jiu-Jitsu” is catching on. No matter what you call the martial art style, at the end of the day, the athletes will compete in Brazilian Jiu-Jitsu events only.

Also, we don’t think the term BJJ is going anywhere. There are several MMA athletes not only in America but all over the world, who insist on calling it BJJ in order to honor the history of the sport. This doesn’t mean Cornelius and others are disrespecting it. They are just trying to modify the sport they love a bit and build something of their own for their fellow athletes, keeping in mind the traditional martial arts.